Tecber works in the Ministry of Health in the
Saharawi refugee camps where she was born. She
will speak about the conditions of life in the camps
and the larger political issues facing Western Sahara

Join us on Tuesday the 15th of October 2019 at 7,30pm at the Waiwhetu Uniting Church, 4 Trafalgar Street.
( Cnr of Trafalgar and Grenville Streets ), Lower Hutt.

We hope that you are free on Tuesday the 23rd of October as…
At the usual venue of the Waiwhetu Uniting Church , 4 Trafalgar Street, Waiwhetu, Lower Hutt and at the usual time of  7.30pm  we will have the following.
Kamal Fadel, of the Frente Polisario, is the Western Sahara Representative for Australia and New Zealand and he will be speaking to us.  Mr Fadel is in New Zealand, Wellington only,  for five days to discuss his country’s plight with the New Zealand Government. 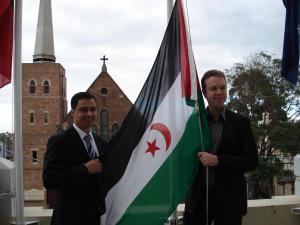 Of late NZ’s role in Western Sahara has been in the spotlight, particularly through the Stuff website, and it seemed opportune for the representative to visit.
The meeting will start with a short film, Sirocco: Winds of Resistance.  Even with a Canadian focus the film directly parallels NZ’s role in the plunder of Western Sahara’s phosphate resource. . The film’s maker Josh Campbell, in Canada, has let us screen the film. This, we understand, will be its first screening in New Zealand. The trailer for the film is here – Sirocco: Winds of Resistance | Official Trailer
Following the film Mr Fadel will speak and then there will be a Question & Answer session.   Followed by tea and coffee.
We hope you can make it.
Mike Barton.
t: 021 2880099

The following links may be of interest to you.

He was the first ever Tibetan refugee to call New Zealand home. Thuten Kesang says it took the intervention of senior politicians to make his journey from Tibet to Auckland possible.

Friday, the 1st of September 2017. Meeting starts at 7.30pm at the Waiwhetu Uniting Church.

On August the 8th 2017 the Waiwhetu Lower Hutt Peace Group is hosting its regular general election event. This is in the form of a meet the candidates night. All the political parties that we know of have been invited. So far the response list is very strong.

Nicky Hager – Tuesday 23rd of May.

On Tuesday the 23rd of May 2017 at 7.30pm the Peace Group will host Nicky Hager.
Nicky Hager’s latest book Hit & Run has generated some controversy. The book written by both Nicky Hager and Jon Stephenson exposed the cover-up of a New Zealand SAS raid in Afghanistan. Nicky Hager will discuss the story behind the investigation and the backlash it attracted. 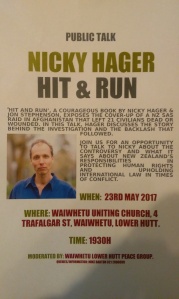 The venue will be our usual the Waiwhetu Uniting Church.

The first Waiwhetu Lower Hutt Peace Group meeting of the year will be held at 7.30pm , Tuesday the 18th of April 2017, at the Waiwhetu Uniting Church,

Challenging Militarism and Building Peace: The pervasive costs and consequences of militarisation in times of peace are often overlooked when compared with the attention given to the tragedy of armed conflict and war. Edwina Hughes (Coordinator, Peace Movement Aotearoa) will provide an overview of those costs and consequences – globally and in Aotearoa New Zealand – in relation to social justice, the environment, climate change, attitudes towards violence as a means of resolving conflict, and the increasing level of militarisation of children and their education here.

Her presentation will conclude with an overview of the outcomes of the nationwide consultation with peace and faith groups to develop responses to the World War One centenary which led to the World War One Centenary Peace Project, and some of the peace events that will be held in the Hutt / Wellington region during April.

The meeting for the 29th of November 2016, that we had advertised, has been cancelled.

Apologies for the short notice.

West Papua solidarity in WellingtonThursday, 1 December 2016Link to share: https://www.facebook.com/events/406256689763761You are invited to join the annual gathering at Parliament, at 1pm on Thursday, 1 December, to fly the Morning Star flag in solidarity with the people of West Papua – please pass this message on, share the Facebook event, and bring your friends, family and colleagues with you to Parliament next Thursday : ) West Papua has been occupied by the Indonesian military since it was handed over, against the will of the indigenous population, to Indonesia in 1963. Since then, the people of West Papua have been subjected to gross human rights violations including rape, torture, cultural genocide, murder and massacre – more than 100,000 West Papuans have been killed. Many live in exile because it is not safe for them to go home. Multi-national corporations in cahoots with the Indonesian authorities have exploited West Papua’s natural resources to an extraordinary degree. This has caused massive social dislocation, devastation of rain forests, pollution of streams and rivers on which the local people depend for their survival, and serious human rights violations in areas where multinationals operate. 1 December is West Papua Independence Day, this year marking the fifty fifth anniversary of the day the West Papuans first raised their new flag, the Morning Star, as the symbol of their forthcoming independence from Dutch colonial rule. In West Papua, people mark Independence Day in a variety of ways, including peaceful gatherings to fly the Morning Star – despite the threat of arrest and murder. In previous years, the Indonesian military and police have responded with increased violent oppression around this day, arresting and killing those they perceive as pro-independence activists. West Papua Independence Day is marked by solidarity events around the world, including here in Aotearoa New Zealand. The annual Morning Star flag raising at parliament is organised by Peace Movement Aotearoa, further information is at ~ https://www.facebook..com/events/406256689763761 ~ http://www.converge.org.nz/pma/wpapua.htm ~ or email pma@xtra.co.nz

A short film highlighting the plight of the people of Western Sahara.

We have highlighted this in a few of the meetings the Peace Group has held.

Greg Rzesniowiecki and Antony Maddock from TPP Action are coming along.

As Antony puts it – “We would love to have a spot where we can explain the lobbying success’ in regards to precautionary protection from the TPP and Free Trade Agreements, this would be in regards to further rallying support for the action that will see LHCC become the 2nd TPP FREE ZONE City in NZ”.

The TPPA has aroused much interested and anger and debate across New Zealand. This will be a chance to hear from two people committed to resisting the TPPA’s introduction.